The concept of “Artists Alley” is not something new to the great conventions from abroad. The last decade has determined the development of this idea on an international level, transforming it in a recruitment area for big visual arts and graphics companies or those that publish comics. This concept was introduced for the first time in Romania in 2009 at the Nijikon Festival in Bucharest and, in 2012 in Cluj Napoca at Japan Play Transylvania, then since 2013 it was part of each edition of East European Comic Con.

Artists’ Alley is a special place for individual artists who wish to display their talents in drawing, graphics, painting, design. Comic Con is here to help young artists and offers them a place where they can sell their own creations, meet fans and sign autographs. Due to the fact that the space on Artists’ Alley is limited, those who desire to take part in this activity must sign up either using the form below or send their CV and a portfolio containing their work at the bellow provided email, after which those selected will be contacted. 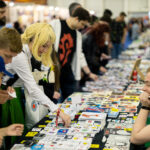 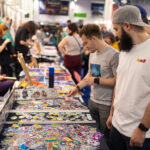 Artists will receive a confirmation of their attendance on the Artists' Alley, only after a portfolio selection. EECC Artists' Alley is a place for individual projects, or projects of 2 artists, but under no circumstances more. Collaboration projects between 3 or more artists, can request an exhibitor booth at the regular price. Bring only your work, not your friend's work, not your family's work or anyone else than yourself. Copyright infringement will result in losing the artist booth, and restriction from ever attending EECC's Artists' Alley.
✕
The Artists’ Alley is dedicated to those who want to sell their own creations which are comic book, anime-manga, superhero, Fan Art, Gaming, TV series and movie themed. Examples of products that are sold in this area: Posters, Prints, Pins, Shirts etc. EECC provides all selected artists with a free space, each of  3.2sqm(1.6m wide x 2m depth ), the artist only have to pay the price of the table, chair and tablecloth.
Sign Up for the Artists' Alley
Tickets
0